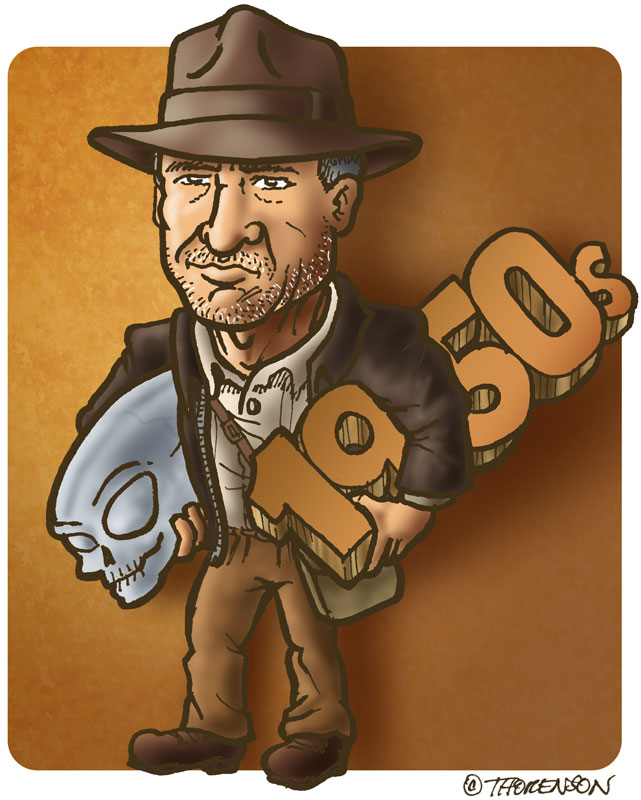 We tried to warn them. Last night, after months of persistent begging, we allowed our two boys to rent the train-wreck that was Indiana Jones and the Crystal Skull. Unbelievably they both felt that it was as bad as we did. At one point my oldest scoffed, “a flying saucer?! C’mon!” My sentiments exactly.

As a fan of the original IJ trilogy, I felt Speilberg and Lucas did this only for the money. How else can you explain the 50s cliche-ridden storyline? It’s like they sat down for drinks one day and decided to make a word list of EVERYTHING that comes to mind when you think of the ‘1950s’. I think they succeeded in putting every last one of those items into the film somehow. Atomic bombs. Aliens. Russians. Greasers. Rock ‘n Roll. Tarzan escapades. Spies. Even Indy himself sarcastically utters the slogan from Eisenhower’s presidential campaign as a defiant response to Cate Blanchett’s Irina Spalko (a dead ringer for Natasha from the Rocky and Bullwinkle Show).

Also laughable was the waffling Mac (Roy Winstone), the mush brain Oxley (John Hurt) and the dysfunctional familial banter between Marian (Karen Allen), Indy and Shia LeBeouf’s Mutt Williams. I still believe George and Steve were banking on audiences to fall in love with Mutt so they could pass the fedora and whip on to him for a couple more films (Mutt Williams and the Cardboard Actor, Mutt Williams and the Terrible Moniker).

I feel bad for panning this movie, but it truly deserves all the Razzies and Rotten Tomatoes it gets. About the only impressive aspect of the film was the fact that the now 67 year-old Harrison Ford looked every bit as young and fit as the 50-something adventurer he was portraying. And that was without special effects. It’s unfortunate that he wasn’t given a more meaty and majestic film to complete the Indy legacy.