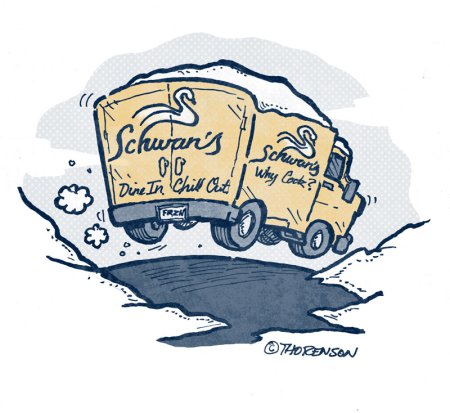 I couldn’t help but notice the Schwan’s catalog this morning on the kitchen table. My wife flatly stated that he was coming tomorrow and began leafing through it. She wasn’t frantic, but I still detected a slight tone of purchase obligation; like we owed the Schwan’s man some business because we asked to be on his route. I realize that Schwan’s sells more than frozen treats, but part of me doesn’t exactly think “let’s get Schwan’s” when it’s -35˚ outside (the goods are probably warmer in the truck).

Getting something from Schwan’s was a premium purchase that happened occasionally when we were kids. In fact, rather than deal with the guilt of turning down the Schwan’s man, we chose to hide behind the couch when he drove by. It’s like the Schwan’s man was some kind of professional beggar. A beggar who forewarned of his panhandling with a slick full-color brochure and handy bright yellow calendar sticker announcing his visits.

Not much has changed, though this routine is a little too fresh to effectively teach the kids how to make it look like no one’s home. Hey, the stuff’s expensive and we live only blocks from a grocery store, so if we did buy something it would only be to help the poor guy having to drive around in this cold, going door-to-door peddling the Schwan’s processed food line. I’d just as soon see him when it warms up a little, but if I come home tomorrow to ice cream drum sticks or orange push-ups I won’t complain.